Assertiveness training – why it fails

Assertiveness training – why it fails

Most of us have had some assertiveness training at some point and while we can see the overall benefits of being assertive, why do we sometimes end up being aggressive and not assertive? It seemed like a great idea to be more assured and confident about how we can get what we want – why did it not work?
Try this: The assertiveness training in the past was limited and did not cover the fluidity and dynamic nature of each situation. It was like trying to apply a standard template to situations which were not anything like the template. It’s not surprising that this was not a combination for success.

But let’s backtrack a bit… a definition of assertiveness:

And I think it’s the ambiguity of ‘claiming your rights’ where we need a rethink. ‘Claiming’ is not like making an insurance claim, where there are rights and obligations, but more about attesting to a particular idea or action: This is what I believe, think or want. And the ‘confidence and directness’ can be used to deliver cleanly, as a statement of fact, without shouting or getting heated and you’re not being passive either.

So how do we behave in an assertive way which is congruent with what we think or want? Firstly, get past the idea that there is passive at one end of the continuum and aggressive at the other – either ends of a straight line. Training is usually centred on being in the middle of the range and while that’s reasonable, it’s not flexible enough to allow you flexibility of responses. It’s either one or the other. Think of a third position outside of that continuum, but related to it. it’s from this third position that we have the chance to state our case and decide what’s negotiable and what’s sacrosanct.

How does is work?

When there is an aggressive person making their claim, most likely being passive with them will not get you anywhere. You’ll be seen as weak and malleable. Being aggressive back at them will likely only inflame the situation and without a pause the situation might deteriorate into a fight of some sort.

So take that pause and you can start to ‘match and mirror’. So you can get passionate (note: not aggressive) about what you want and be clear you are not backing down and being passive. Not backing down does not mean you are puffing yourself up for a fight. It means you are sure of your convictions and you are ‘asserting’ what you want.

You are sure about what it is you want, aren’t you? If you aren’t, you will probably have difficulty getting into a position where you can ‘assert’ what you want.

The ‘matching and mirroring’ is a means of interaction that allows you at a non-verbal level to be with the other person. It’s a way of building rapport. And bear in mind that rapport is not (only) about getting along with another; it’s about matching the ‘state’ of the other person and then being able to move the other person’s state to somewhere more useful for them – and you.

When the phone rings and there’s a hard-sell call centre on the other end, I might assert: “I am not interested in your product or services.” They continue to blather on about what the product can do for me. I have responded, loudly, “Hello, can you hear me? I said I’m not interested.” I’ve changed the way I respond to match the callers approach. This usually gets their attention and they then finish up the call I had to match their communication approach before mine would get through. Cold calls are a useful way of practicing being assertive! 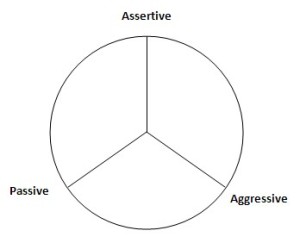 You can move about from being passive to passive/assertive (‘Oh, ok, I see what you mean by that’ followed by, ‘I’m not sure you understand what I want from you’).

So the next time you are in a situation where you are thinking about how you might need to be assertive, consider this diagram and appreciate your range of responses is expanded with multiple points across that circle.

More by Michael
MAKE AN ENQUIRY